I can’t see a better way to start a contrarian thesis than by mentioning the Ukrainian conflict. To be frank, most of us were expecting the massively superior invading force to rapidly overwhelm the defenders, but this did not happen. Another likely scenario was the conflict turning into guerrilla warfare with Ukraine’s ragtag troops launching sporadic assaults from underground hideouts, but, few predicted that they would launch a full-fledged offensive just like a regular army would do.

Now, the general perception is that the gains have largely been made possible by U.S.-supplied sophisticated weapons such as the Javelin-guided missiles jointly built jointly by Raytheon Technologies (NYSE:RTX) and Lockheed Martin (LMT). As a result, the market has rewarded the companies with higher price-to-sales ratios as shown in the table below.

Instead, the much lower P/S of Maxar Technologies (NYSE:MAXR) shows that investors are underestimating this satellite play whose high-precision images proved crucial to Ukrainians in averting a fatal blow at the very beginning of the conflict and is now proving vital in guiding the country’s troop in their present advance towards the East.

Contrarily to what some may think, the aim of this thesis is not to make a bearish case for Raytheon in favor of Maxar, but, instead, to apply the notion that for success on the battlefield, be it for defensive or offensive actions, intelligence data is crucial, to the same degree as the most sophisticated weapon.

I start by highlighting the importance of satellite imagery beyond the military context as well as Maxar’s role in the wider space economy.

Satellite imagery has provided valuable data for making key decisions that have saved people’s lives, helped defenders anticipate attacks, assessed damage after the destruction of infrastructure, and monitor refugee movements. They have even provided footage of Russian ships being loaded with Ukrainian grain as well as how the country’s harvest has been shrunk by half. This shows that potential applications are not only restricted to conflict zones but also span civilian uses like planning land use for agriculture, and coordinating complex logistics operations including ships, cargo planes, and land-based transportation. Other uses include tracking leakage of oil and environment monitoring.

For this purpose, Maxar has a high-resolution fleet of WorldView satellites and related revenues are accounted into the Earth Intelligence segment as shown in the left-hand side picture below. The segment saw growth in product revenues during the second quarter of 2022. Still, as shown in the right-hand side chart, revenues for Q2 were less on a year-on-year basis, due to weakness in the Space Infrastructure segment.

Combined together, these two segments show that Maxar is more of a space technology company, as, in addition to earth observation, it also specializes in manufacturing and on-orbit servicing for satellites and related communication products.

Looking into the rear mirror, Maxar was historically (up till the mid-2010s) a strong player in manufacturing GEO or geostationary earth-orbiting satellites, but, subsequently went into a period of decline. This period more or less coincided with the creation of SpaceX (SPACE) by Elon Musk in 2002, whose popular Starlink (STRLK) constellation of satellites use LEO or Low Earth Orbit. These are situated nearer the earth than their GEO counterparts and have proved successful in providing wireless communications to remote areas.

However, the satellite company did fight back, helped by long-standing partnerships with the U.S. government for both civil and military purposes. Interestingly, its commercial satellite bus is used by NASA programs, namely for the planned Psyche mission for prospecting a metal-rich asteroid orbiting the Sun.

Consequently, with an evolving product suite and diversified customer base, Maxar has managed to recover from its 2010 lows as shown in the blue chart below. It has grown by an astounding 146.8% since 2005 which is nearly five times Raytheon’s.

Raytheon And Its Hypersonic Cruise Missile

The latter nonetheless generates a much higher level of revenues of $64.4 billion for 2021 compared to only $1.77 billion for Maxar. 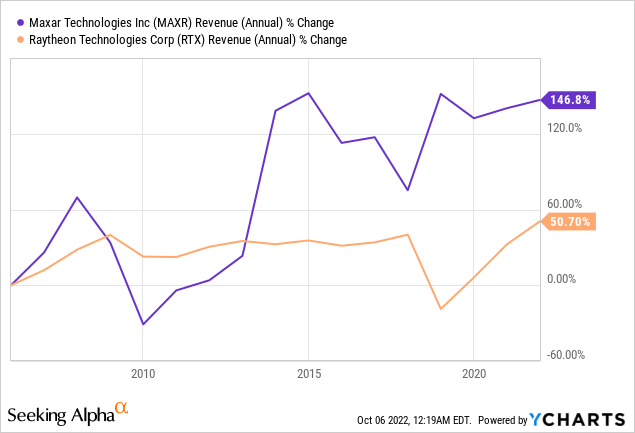 The advanced weapons company also saw its revenues plummet in 2018 as seen by the orange chart above but has since then recovered, and this growth trajectory should be sustained after being awarded more contracts since the intensifying of the East European conflict.

Thus, in August, a $311.2 million contract was awarded to the Raytheon/Lockheed Martin joint venture for full-rate production of Javelins till November 2026. This covers 1,800 missiles which should replenish the U.S. Army’s inventory of Javelin to offset those to be sent to Ukraine and other allies. This is in addition to an earlier $352 million contract again for the missiles. The company also recently benefited from a $225.6 million contract for the AIM-9X system deployed in the Naval air system.

As a result, Raytheon expects FY2022 revenues of $67.75 billion to $68.75 billion whose midpoint of $68.25 billion constitutes an increase of 6% over 2021. However, it trimmed its full-year free cash flow to about $4 billion from the $6 billion initially expected, due to higher costs and supply chain issues.

To be realistic, Raytheon already has an Intelligence and Space segment, but, contrarily to Maxar which is growing sales, the defense company is struggling as evidenced by a revenue regression of 6% during its last reported quarter and its backlog remains below the satellite play when compared on relative terms.

Looking across the defense industry, Raytheon has beaten its competitors Boeing (BA) and Lockheed Martin to supply a $985 million hypersonic cruise missile to the U.S. Air Force. One of the factors which weighed on the decision appeared to have been the fairly short development time whereby the device will have to be operational by 2027, in an attempt to make up for the delay compared to the Chinese and Russians.

The ultimate objective is to target enemies and destroy them at a greater distance compared to what is possible through more conventional weaponry.

Now, these new missiles incorporate advanced guidance systems for the precise locking of targets, but, as events in Ukraine have shown, there is still a need for high-precision satellite imagery and data analytics in any conflict zone, signifying more revenues for both Maxar and Raytheon. Examples that come to mind are increased militarisation not only in Europe but also in East Asia after heightened geopolitical tensions concerning Taiwan, whereby countries like Japan and South Korea increasingly need to know what is happening within the territories of their belligerent neighbors, in order not to caught off guard as in East Europe.

In order to get a sense of the value of satellite imagery, just think for one moment about the alternative, namely during the cold war, when spies had to infiltrate enemy lines in order to observe troop movement. For a territory the size of Ukraine, this would require an army of spies whose activities would have to be coordinated by the commanding officer before being relayed to the central command taking days. In contrast, data is now downloaded from Maxar’s satellites and transmitted to them within hours.

As for valuations, considering that Maxar’s role also encompasses the whole satellite ecosystem, it operates as part of the global space economy. According to Euroconsult, this economy reached $370 billion in 2021 with one of the factors enabling this is the opening up of the field to private companies, in turn leading to lower launch costs. Going forward, the space economy is expected to grow by 6.3% CAGR to reach $642 billion by 2030. This is equivalent to 74% ((642-370)/370) growth from 2022 to 2030. Multiplying Maxar’s 2021 revenues by 74% gives $3.1 billion for 2030.

In support of this target, the company’s total book-to-bill increased by four times, adding $1.5 billion to the existing backlog resulting in a total of $3.2 billion.

Thus, Maxar is a buy, and based on its lower trailing P/S relative to the industrials sector by 27.44% as shown in the table below, I obtain a target of around $27 (23.41 x 1.27) based on the current share price of $23.41. Moreover, the company’s positive EBITDA valuations show that it is profitable based on non-GAAP metrics, which may not be the case for other high-growth satellite plays. 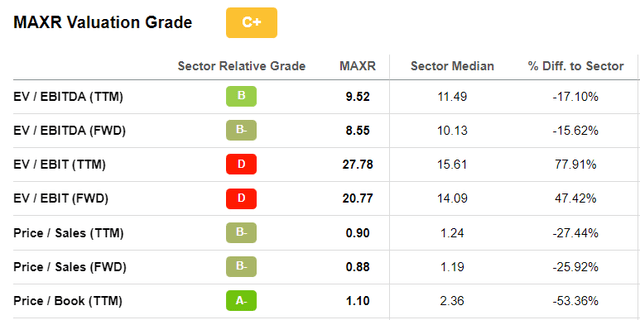 As for Raytheon, its price to sales at 1.9x is already above the sector median of 1.24x. Still, at around $85, it is a worthy investment to hold especially given that it pays a dividend yield of 2.58%. Still, with the Fed raising interest rates rapidly and the market increasingly focusing its attention on liquidity as monetary conditions further tighten its lower free cash flow guidance for this fiscal year may result in volatility for the stock.

This is precisely the reason why it is better for investors to consider adding some Maxar shares to their defense stock portfolio instead of buying more Raytheon. You may also consider this move as diversification.

On a cautionary note, the satellite play does have a large debt of $2.4 billion and its borrowing cost should increase as the Fed gets more hawkish. However, to address the issue, it managed to reduce interest payments through debt refinancing, which is a positive.

Finally, based on the contrarian outlook, this thesis has a $27 price target for Maxar, but, investors should note that the market remains highly volatile, with the S&P 500 having already lost 21% since the start of this year. This downtrend has been punctuated by some bounces, which normally happen during bear market conditions, signifying that there are further downside risks. Thus, it makes sense to exercise caution and adopt patience, a virtue that can help investors benefit from a better margin of safety.

Editor’s Note: This article was submitted as part of Seeking Alpha’s best contrarian investment competition which runs through October 10. With cash prizes and a chance to chat with the CEO, this competition – open to all contributors – is not one you want to miss. Click here to find out more and submit your article today!

ToolsLand One stop WEB 3 tool service platform, taking you into the WEB3 world