ATHENS — The European Union is struggling to secure COVID-19 vaccines for itself, as well as offer them to foreign countries, while China is exerting its influence by supplying jabs to emerging economies.

Although state-owned Sinopharm and other Chinese makers of COVID vaccines have not applied to the European Medicine Agency for licenses to distribute their shots, they are finding their way into European arms. Many experts, however, have expressed concern over a lack of transparency in China’s clinical trials, fueling debate over the wisdom of accepting the supplies.

China participated in the 17+1 summit with Central and Eastern European Countries (CEEC) on Feb. 9 in hopes of gaining a foothold in the European vaccine market. In an online speech to the conference, Chinese President Xi Jinping pledged: “China will continue to provide vaccines to countries in need to the best of its capability, and do what it can to make vaccines a global public good.”

Hungary is among the countries complaining the loudest about a shortage of approved options in Europe. Prime Minister Victor Orban made vaccine deals with China as well as Russia, blaming the EU for the delays in distribution. He received a Chinese jab on live TV.

Budapest has imported a huge amount of vaccines, with at least 1.7 million people already receiving their first doses.

“The issues and the communication around the jabs have been politicized. Only politicians are talking about the vaccines, and mostly about the Eastern vaccines,” Gabriella Lantos, former chief operating officer of the biggest Hungarian private hospital, Robert Karoly, told Nikkei Asia.

A family doctor gives a Sinopharm coronavirus shot to a patient in Budapest, Hungary, on Feb. 26.

But concerns over Chinese and Russian influence in Europe have also stirred controversy. “Europe will not use vaccines for propaganda purposes. We promote our values,” said Charles Michel, president of the European Council, at a summit of EU leaders in early February.

“We should not let ourselves be misled by China and Russia — both regimes with less desirable values than ours — as they organize highly limited but widely publicized operations to supply vaccines to others,” Michel said.

Geopolitical misgivings are coupled with nagging doubts about the vaccines themselves.

On March 24, the Ukrainian Health Ministry’s medical procurement agency announced that it could not accept the first batch from Sinovac Biotech, another Chinese company, because the supplier did not provide the required documents. Still, the vaccines reached the country the next day, according to China’s state-owned Xinhua News Agency.

Polish President Andrzej Duda had spoken with his Chinese counterpart about buying Chinese jabs to speed up inoculations. But a few days later Poland’s health minister, Adam Niedzielski, said he did not currently recommend using Sinopharm’s vaccine because of a lack of data.

Russian supplies are proving just as contentious. In Slovakia, the purchase of around 2 million doses of the Sputnik V vaccine without the approval of two of the four parties of Prime Minister Igor Matovic’s coalition government sparked a political crisis, leading to Matovic’s resignation on Tuesday.

Experts see a larger strategy behind China’s vaccine export drive. “China is trying to portray itself as a part of the solution, rather than a source of the problem, as it was at the beginning of the pandemic,” said Ivana Karaskova, founder of China Observers in Central and Eastern Europe (CHOICE), a platform for monitoring Chinese influence in the region.

“While Western countries are hoarding vaccines, China is parading in the developing countries, declaring that vaccines are a public good. At first, Beijing sent masks around the world. Now it is making a huge diplomatic push with its vaccines.”

China has played an important role in Serbia’s vaccination campaign. With close to 20% of the population fully vaccinated, the campaign is regarded as a political win for President Aleksandar Vucic. And Serbia has been able to donate vaccines to Bosnia, North Macedonia and Republika Srpska in Bosnia, posing as a regional leader.

Every time Sinopharm vaccines arrived at the Belgrade airport, Vucic was there to welcome the arrival, generating publicity. Vucic has also announced that Serbia will be the first European country to produce the Sinopharm vaccine. An agreement to build a factory, funded by China and the United Arab Emirates, is supposed to be signed in the coming weeks.

Although it is a candidate to join the EU, Serbia maintains close diplomatic and economic relations with Moscow and Beijing.

“People trust all the vaccines, including the Chinese one. The Chinese vaccines were purchased with an EU fund, but few people know it,” Stefan Vladisavljev, program coordinator at the Belgrade Fund for Political Excellence, told Nikkei. 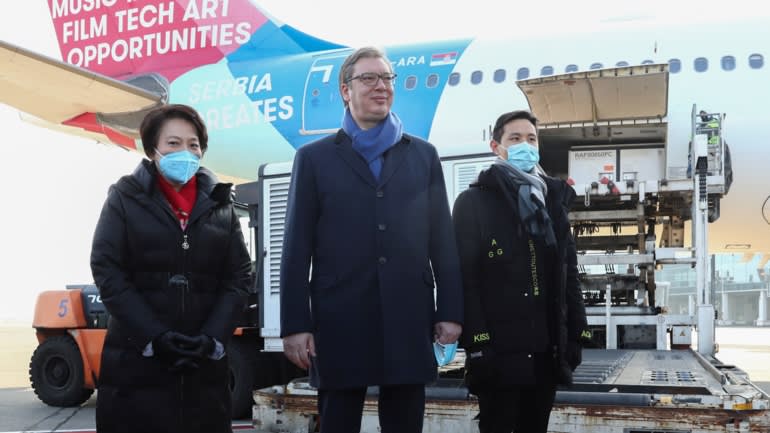 “It’s a question of supply and demand,” said Jacob Mardell, an analyst at the Mercator Institute for China Studies based in Germany. “As Pfizer and Moderna lack the capacity for production, developing countries turn to China, [which] can manufacture vaccines and make them available to others.”

China has put the COVID-19 vaccines developed by Sinopharm into mass production. According to Yu Qingming, the company’s chairman, this year’s output is expected to surpass 1 billion doses, rising to 3 billion in the future.

In Turkey, the rollout of COVID-19 shots developed by Sinovac started on Jan. 14. Until the end of March, the Chinese vaccine was the only option available in the country. A 77-year-old woman living in Istanbul told Nikkei she had received the Sinovac jabs. “If I had the choice, I would have preferred the Pfizer vaccine,” she said, “But the Turkish drug regulator approved the Chinese vaccine and a Phase 3 trial done in Turkey showed 84% efficiency.”

Professor Vedat Bulut, general secretary of the Turkish Medical Association, put it simply: “For Turkey, choosing the Sinovac vaccine was a matter of supply.”

China’s vaccine diplomacy has clearly gained traction. The country had pledged roughly half a billion doses to 68 countries as of March 17, according to a tally by the Association for International Affairs, a Prague-based nongovernmental organization. Beijing has targeted the low- and middle-income countries largely left behind as rich nations scooped up most of the pricey vaccines produced by the likes of Pfizer and Moderna.

But Yanzhong Huang, senior fellow for global health at the Council on Foreign Relations, thinks the trend could change: “As the U.S. is very likely to reach herd immunity before China, we are going to see a change of dynamics in the upcoming months.”

Krishna Udayakumar, founding director of the Duke Global Health Innovation Center at Duke University in the U.S., agreed. “The situation may change in a couple of months. The Biden administration is trying to change the U.S. engagement narrative to the world, pledging $4 billion to the COVAX mechanism,” he told Nikkei, referring to the World Health Organization-backed program that supplies shots to poorer countries.

Even so, Udayakumar added: “Every moment counts in a crisis. People will remember the countries that were there to help, [and] China is deploying its soft power.”

Questions about Chinese vaccines’ efficacy persist but do not appear to be a deal-breaker. Huang told Nikkei: “The efficacy of the vaccines is not a major concern to the countries that don’t have options.”

Either way, Feigl-Ding said, “In my opinion, all the current vaccines work against severe disease and mortality in their trials.”

In Latin America, the region is divided between Western, Russian, and Chinese vaccines.

On March 10, Patricia Medina, a 52-year-old health worker, waited her turn at a vaccination center in La Florida, one of the most densely populated parts of Chile’s capital, Santiago. “The only people doubting Sinovac are the youngsters who say that it’s Chinese, and that nobody knows what happens after you are vaccinated. Older people just want to live.”

Rodolfo Carter, mayor of La Florida, said: “We started the vaccinations on Feb. 3. Now, close to 12,000 are vaccinated daily.” He added that in about two months, polls show confidence in the vaccines jumping to between 90% and 95%, from around 30%.

“People don’t care which vaccine they get,” Carter said, “as long as they get vaccinated.”

In sub-Saharan Africa, Chinese vaccines appear to be mostly distributed through COVAX. Rashid Arthur Salimu, 36, who works for a Zimbabwe government agency, got his first jab of Sinopharm’s vaccine in early March. “Trust is a big word,” Salimu said. “But we do not have much choice. At the moment, Sinopharm is the only available vaccine.”