East Mediterranean gas reserves can help ease Europe’s energy crunch but require funding from institutions like the European Bank for Reconstruction and Development and the European Investment Bank to realise the area’s full potential, an official said on Friday (14 October).

Offshore areas in the eastern Mediterranean and Levant have yielded major gas discoveries in the past decade, with interest in them increasing since the disruption of flows from Russia following its invasion of Ukraine.

“If we need to secure the energy quickly…I think we need to incentivise these companies, the countries, the developers, by securing them funds,” said Tarek El Molla, Egypt’s petroleum minister, speaking in Nicosia.

“And when I talk about funds I am not talking about commercial funds… They need to be somehow concessionary funds with easy access and relaxed terms,” he said, pointing to organisations like the EBRD and the EIB – the lending arm of the European Union.

However, both the EIB and the EBRD have said they are scrapping investments in oil and gas projects to align with climate change goals.

In reference to that position, Molla said: “If you are not going to talk about hydrocarbons how are we going to accelerate these projects?”

Europe’s new push for diversification from Russia’s energy has revived talks about a pipeline bringing natural gas from the Eastern Mediterranean to Greece and the rest of south-east Europe. However, the European Commission still insists on the EastMed pipeline’s commercial viability before giving its final blessing.

Such financing packages, he said, could run alongside ‘important efforts’ to build a green corridor between the East Mediterranean and Europe focused on either hydrogen or renewable electricity.

“This all should be carried together in parallel,” he said.

In June, the European Commission signed a memorandum of understanding on gas exports between Egypt, Israel and the EU.

It says the three sides “will endeavour to work collectively towards enabling a stable delivery of natural gas to the EU that is consistent with long-term decarbonisation objectives and is based on the principle of market-oriented pricing”.

Israel already exports gas from an offshore field to Egypt, where it is liquefied and shipped to European countries. But a significant increase in gas exports from Israel via Egypt would require major long-term infrastructure investments.

During her June visit to Cairo, Commission president Ursula von der Leyen also said Egypt had sun and wind power in abundance, and that jointly exploring them was in the “common interest” of the EU and Egypt . 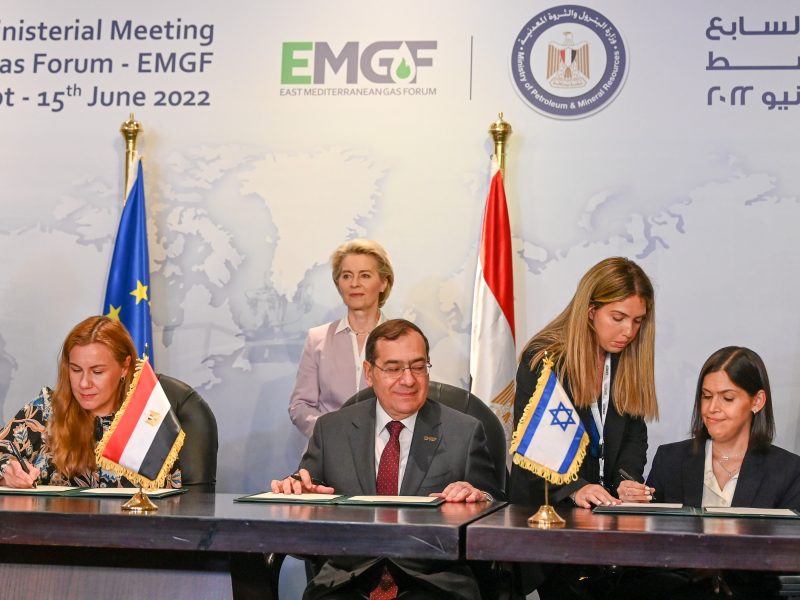 Cyprus and Greece on Friday inaugurated the construction phase of the EuroAsia Interconnector, an EU-funded subsea cable that will cross the Mediterranean carrying up to 2,000 megawatts of electricity to eventually link grids from Israel and Cyprus to Greece.

“The EuroAsia Interconnector is yet another key infrastructure project strengthening the EU’s energy security by linking Cyprus to the EU’s electricity grid and contributing to our ambitious decarbonisation objectives,” said EU Energy Commissioner Kadri Simson.

Cypriot President Nicos Anastasiades said preparations were also underway to launch a ‘EuroAfrica’ Interconnector which would connect Egypt to the grid.

Egypt will host the UN COP27 climate conference in Sharm el-Sheikh in November.