A Ukrainian serviceman patrols the front line, not far from the pro-Russian-controlled city of Donetsk, February 2 2022. Photo: EPA-EFE/STANISLAV KOZLIUK

Governments all over South-eastern Europe have urged their citizens to leave Ukraine due to concerns that the Russian-Ukrainian conflict is intensifying. Most of these warnings came over the weekend.

Serbia’s Foreign Affairs Ministry on Sunday evening said Serbian citizens in Ukraine should “consider the possibility of temporarily leaving the territory of that country.

“We also recommend citizens of the Republic of Serbia who plan to travel to Ukraine to consider postponing the trip,” the ministry said on its website.

Kosovo’s Foreign Ministry called on citizens “not to travel to Ukraine and, if they are there, to leave as soon as possible”. Contacts for Kosovo citizens in Ukraine are available here.

On Saturday, Croatia, Slovenia, Albania, Romania and Turkey all called on citizens to leave Ukraine or to postpone travel there.

Croatia advised its citizens “to avoid traveling to Ukraine, especially along the border with Russia and Belarus and near the line of separation with the temporarily occupied areas of Crimea and Donbas”.

The Slovenian Foreign Ministry said it believed between 70 and 80 Slovenian citizens were currently in Ukraine. Besides telling people not to go to Ukraine, or to leave it. Slovenia recommended its citizens to register online in case of travel or being in Ukraine.

Together with similar warnings and recommendations, Albania has issued ways to contact citizens in Ukraine.

Romania’s Foreign Ministry said that, “in the context of the latest security developments in the vicinity of Ukraine and the Black Sea region … the alert level for Ukraine has been raised”.

It recommend Romanians in Ukraine “to re-evaluate the need to remain on the territory of this state”, and urged those who plan to travel to Ukraine to avoid doing so for now. Contacts for Romanian citizens are available here.

Referencing Russian-held Crimea and eastern areas controlled by pro-Russian forces, the ministry “also strongly recommends avoiding travel to the Crimean Peninsula and eastern Ukraine, the Donetsk and Lugansk regions, as well as the Ukrainian border with the Russian Federation and Belarus, recalling that the security situation remains tense and fluid”. 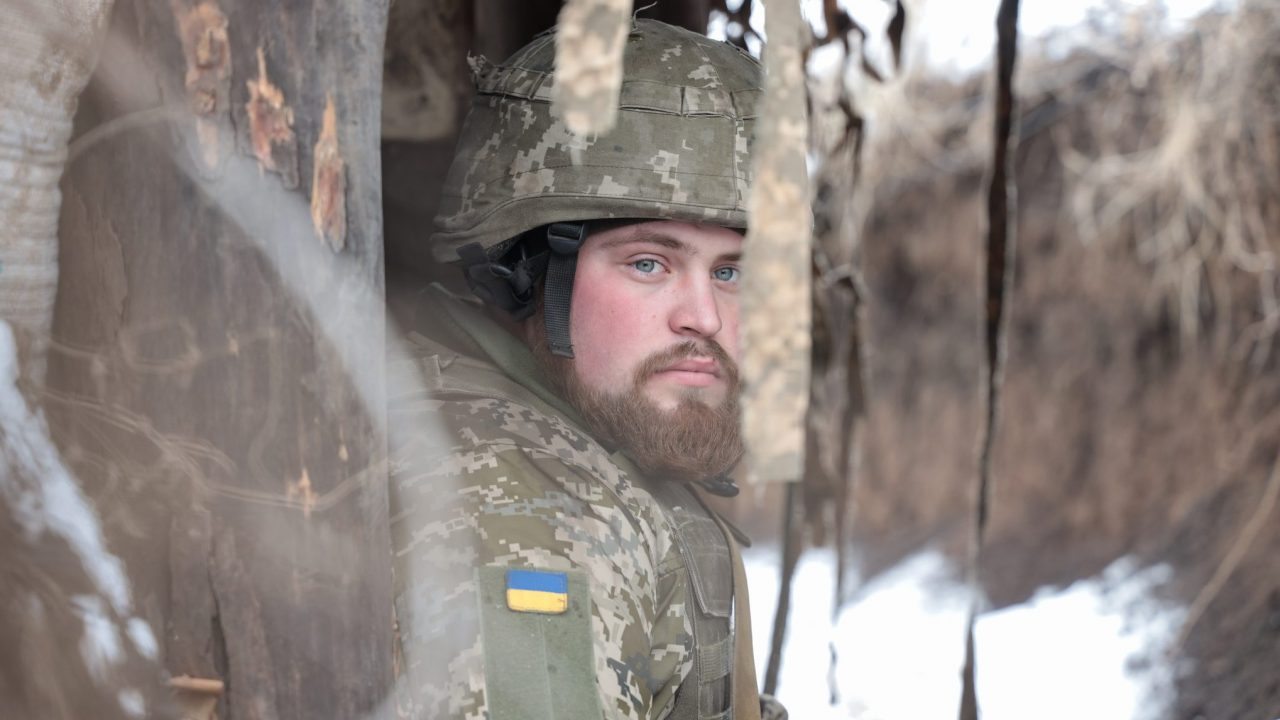 A Ukrainian serviceman on a front line, not far from the pro-Russian-controlled city of Horlivka, Ukraine, January 31 2022. Photo: EPA-EFE/STANISLAV KOZLIUK

Moldova’s Ministry of Foreign Affairs recommended citizens “to follow with priority the announcements of the authorities and official information disseminated by credible sources”. It has opened a 24/7 telephone line for its citizens in Ukraine.

Turkey has recommended its citizens “to refrain from traveling to the eastern border regions of Ukraine unless they have to”, and shared contacts with the embassy in Kiev that can be reached in case of emergency.

Montenegro, North Macedonia, Bulgaria and Greece all advised their citizens against staying in or traveling to Ukraine on Friday.

Montenegro recommend its citizens “to consider the possibility of temporarily leaving” Ukraine “due to growing tensions and an unpredictable security situation”. Contacts for citizens residing in Ukraine are available here.

North Macedonia called on citizens “who planned to visit Ukraine in the upcoming period, to avoid travel to the country; in addition, all our citizens who are now in Ukraine, if they have the opportunity, to leave the country as soon as possible”.

It reminded them they can reach the embassy in Kiev using these contacts. Foreign Minister Bujar Osmani has said that diplomatic staff will remain in the embassy, while their families will return home.

Bulgaria called on its citizens to refrain from travel to Ukraine and urged those already there “to take measures to leave the country with the currently available vehicles”. Bulgaria also called on citizens in Ukraine to register online and shared contacts of its local diplomatic offices.

Greece advised its citizens in Ukraine to keep in touch with the Greek embassy in Kiev.

Bosnia and Herzegovina urged its citizens “to avoid traveling to areas in Ukraine where, according to media reports, there has been a deterioration in the security situation and the concentration of military forces” in the beginning of February.

“For travel to other parts of Ukraine, we advise citizens of Bosnia and Herzegovina to postpone travel that is not necessary until further notice,” it said. It reminded citizens that Bosnian embassy in Hungary is in charge of Bosnian nationals in Ukraine.